In 2008 the 3DVisLab, in collaboration with ADUS, developed WreckSight, an interactive tool for visualising inaccessible subsea environments such as shipwrecks.

The ADUS DeepOcean project builds upon the foundational work undertaken on WreckSight and focuses on delivering and optimised workflow for producing engaging, aesthetically-driven 3D data visualisations for Offshore Renewables and Oil and Gas industries.

When ADUS DeepOcean in 2008 identified the need for a customised data visualisation environment to support the recreational diving market it quickly became apparent that the technology was going to be of interest in other markets such as Offshore Renewables and Oil & Gas. The challenge for this project was to optimise the visualisation process which was initially artisan-led and took up to three days per visualisation.

In the second year of the project further work on the optimisation of the visualisation processes resulted in a fully automated workflow with which offshore survey data could be processed and visualised at the rate of one every 2 minutes whilst preserving all of the aesthetic and interactive elements of the original process.

This project also considered appropriate interfaces for assessing the status of offshore assets based on time-interval survey data. Given the advances that were made in data processing speed it became viable to consider whether visual data analytics of asset fields could be generated dynamically from data. This method, dubbed Data As Interface (DASI) became a major focus in the second year of the project. 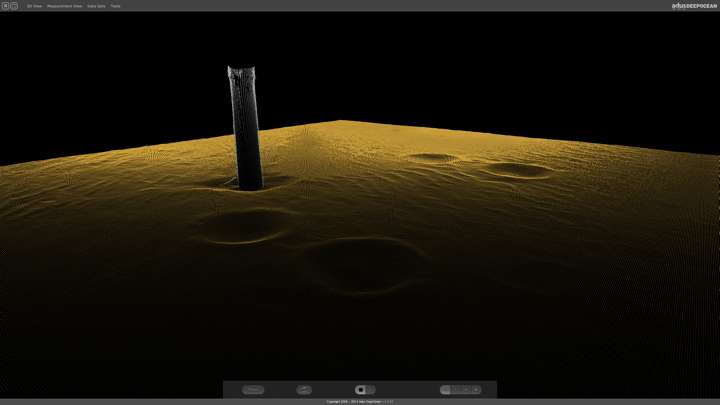 Output of the optimised visualisation production process retaining all aesthetic and interactive elements of the original process.